When Did We Start Wanting the Stick to Turn Blue? 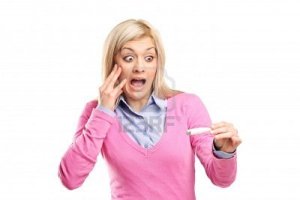 Several years ago, a strange phenomenon began to occur within my circle of friends.   I don’t know if it was influenced by the tides or the alignment of the planets, or if it was the result of a massive failure in 1990‘s safe-sex education.  But for whatever reasons, during the mid 2000’s, many of my friends began to procreate like they were on a mission to repopulate the island.

I watched the baby epidemic sweep through the bars and restaurants.  Hell, for a while there, we all thought there was something funny in the Peppermint Schnapps at The Green Parrot, as the employees began producing children like they were in some sort of fertility contest.

Bartender Kate Fago, (mother of TWO,) assures me that the Parakeet baby boom was a random occurrence, not linked to any paranormal activity or spiked libations.  But I’m still skeptical.

(Let’s see:  Between 2005 and just last year, we saw the birth of Teagan, Ryan, Colin, Paul, Jake, Jaqueline and Bailour.  And I don’t even want to think about all the pregnancies that occurred post-Suenalo shows!)

But beyond the fertility hot spot at the corner of Franklin and Einstein, babies were being born all over town.

My friends, of their own volition, began to nest.  They coupled-off, they bought houses and sent me invitations that required my presence in a church.  The women began talking calendars, biological clocks, temperatures, even musing about which pregnancy tests were easiest pee on!   Not only were they forgoing birth control, they were trying to get knocked-up on purpose!

Pregnancy tests aren’t something you buy in bulk with regular toiletries and a good faith candle while whispering to the person behind you in line, “We’re trying really hard for a baby.”  No!  No!  No!  Pregnancy tests are something you buy in the middle of the night at Walgreens, on a wing and a prayer, hoping like hell, no one you know sees you.  And if anyone does look at you sideways, you lie and say “I’m buying this for a friend.”

Don’t get me wrong–some of my not-so-hitched friends were downright surprised that their little sticks turned bright blue when they peed on them…..that ALL of the little sticks turned bright blue.  But their reactions were what surprised me the most.  They were excited at the prospect of becoming mothers, and even more so, excited at embarking on this next chapter of their lives.

For me, the transition from “Key West Friend” to “Auntie Leigh” was awkward.  I just didn’t get it.  Knowing from a young age that I never wanted to have children of my own, I guess it was hard to understand the biological, normal longings of others.

It was a rude awakening, realizing that your friends, the people who were always there for you when you needed a friendly ear, moral support or just a buddy to share a beer with, were no longer available for ANYTHING because some little rugrat had taken over their lives.   Genuinely, I wanted to be happy for my friends as the children they so longed for entered their lives.  But a little selfish piece of me knew that our friendships would be forever changed.  That same selfish part of me mourned the loss of the child-free friend, and worried that the friendship wouldn’t endure.

Not too long ago when my friend Jo Ell was pregnant, I had a heart to heart with her husband Landon.  I was worried about the arrival of their son; worried that things would never be the same, worried they would like him more than me.  Landon warned me:  “We ARE going to love him more than you.  And things will be fine.  Just different.”

And they are.  Things are fine.  But different.  I don’t get to see Landon and Jo Ell as much.  But when I do, the time is more special.  It’s, dare I say, precious?

Just last week I swallowed my anti-kid rhetoric and visited Landon and Jo Ell’s son, Tiberius.  It wasn’t hard to knock-off my unfriendly-to-kids crap as Tiber’s inherent cuteness turns off the child-repellent radar whether I like it or not.  He’s a much better audience to try out my humor than you, here, reading this.  With Tiber, all I have to do is say the word “avocado,” and he shrivels up his face and giggles as if I’ve just told the best joke ever!   Tiber rides a blue dog named “Woof Woof” (which is more reliable transportation than some of my childless friends possess,) and he sneaks his kitty bites of food, much to his mother’s chagrin.    He’s a gregarious little boy.  He studies you a bit….takes you in, decides how he’d like to react to you.   More importantly he’s the apple of his parents’ eye.  He is their whole world and I am honored to be a part of it.

As long as he remains an only child.

This entry was posted in The Drink Slinger Story Time. Bookmark the permalink.

2 responses to “When Did We Start Wanting the Stick to Turn Blue?”